How do you convince libs China is less authoritarian than the US?

How do you convince libs China is less authoritarian than the US?

I’m “debating” a Liberal who thinks “Marx had some valid critiques of capitalism” and “the US has done some bad things” but isn’t great on AES. I sent them the recent post showing that China doesn’t block western media, and they said that it only shows one computer and smart people can get around blocked stuff, and I explained what it actually shows before they said “China is still more authoritarian than the US and my personal freedoms aren’t stopped by my government” (note: all of these are paraphrases, but I don’t think I’ve strawmanned anything). So, what are some solid examples of the average citizens in socialist countries having more “freedom” than in capitalist countries? Edit: Thanks for all the great responses!

Its a problematic question, because authoritarianism here is just being used as a dogwhistle for socialism, so the question becomes “how is china less socialist than US?”. You’re not arguing that socialism is good here, you’re agreeing it’s bad and countering them by saying America is even more socialist, a specious argument at best

“It is difficult for me to imagine what “personal liberty” is enjoyed by an unemployed person, who goes about hungry, and cannot find employment.

Real liberty can exist only where exploitation has been abolished, where there is no oppression of some by others, where there is no unemployment and poverty, where a man is not haunted by the fear of being tomorrow deprived of work, of home and of bread. Only in such a society is real, and not paper, personal and every other liberty possible.”

You articulated exactly what my thoughts were. The primary goal of socialism isn’t to enact more libertarian policies but to create a state which better serves the welfare and interest of it’s lower class workers, for example providing better public transport.

US prison population and military expenditure compared to China should say it all. That and the fact that people can’t afford healthcare and housing despite having full time jobs.

Anyone who isn’t convinced by those simple metrics is just operating off of racism and privilege and there’s not gonna be much you can say to convince them otherwise. IMO, value your mental health and move on.

YES! Prisons, military and police are so drastically different between the two and are the immediate idea that pops in the head of what an “authoritarian/tyrannical regime” looks like.

Unfortunately many libs still think there is a good standard of living compared to China, though middle class statistics may help there still is a strong fascist middle class living off of America’s spoils of imperialism. Still, there’s quick numbers to cite here too.

Somehow I didn’t think to look there first, thanks

Never seen this, this is a dream come true

Alarming number of dead links though

Yes very disappointed but maybe it can be cleaned up?

Can’t they drink in public there? Can’t do that here without a possible PI. I’m sure there are tons of small examples like that, and I honestly think those more individual freedoms are going to be more convincing to people in the US than political structures. Show them that collectivism doesn’t hinder individual rights unless those “rights” harm others kinda thing.

First time I ever visited China I was invited on a pub crawl with a bus. I get on the bus and the driver hands me two beers from a cooler, fun times were had. Would never happen here in Canada where even having a beer in the park is risking a ticket

While China is a lot less authoritarian than the US when it comes to matters especially like policing and aspects of daily life, you are always going to fall into a trap when you let them make the conversation about this, because in some respects, China is more authoritarian than the US, especially when it comes to things like censorship, the Great Firewall, lockdowns, and the housing market.

In discussions with liberals, make it clear to them that authoritarian measures (because “authoritarianism” is a nonsensical term) are not an intrinsic quality of any particular mode of production or individual countries, cultures, and governments, but are simply means at the disposal of whatever form of governance of whatever body to reach certain aims which it has set itself faster, more reliably, and with greater accuracy. Explain to them what is the purpose of such authoritarian measures in China, and how they are necessary to provide for public health, prevent terrorism and fake news, and eliminate poverty. If they say they do not care what China’s aims are, or for the results which it has achieved, but for the life of “the individual”, explain that it does not matter what they think because in China, having healthy grandparents, a full fridge, a good university education, rights on the job, your own home, no loans to pay off, and a safe, clean, and lively neighbourhood beats the ability to behave inconsiderately for dubious personal gain at least 95% of the time.

Only once you have explained all of this should you go back to the original matter and ask them: What is the reason for the cases in which the US actually does behave more authoritarian than China? What exactly does the average US citizen gain from broken window policing, civil asset forfeiture, prohibition of drinking in public, loitering laws, and the suppression of shadow libraries? Or is there someone, something entirely un-average at whose behest these laws are made?

having healthy grandparents, a full fridge, a good university education, rights on the job, your own home, no loans to pay off, and a safe, clean, and lively neighbourhood beats the ability to behave inconsiderately for dubious personal gain at least 95% of the time.

I might get this tattooed on my forehead. It’s a bit long for my knuckles, but it would be nicely underlined by my eyebrows.

I don’t have the sources on hand rn but you can cite the correlation between citizens’ wishes and legislation in various countries. In the US there’s literally no statistically significant correlation, there’s a little bit of correlation in many European countries, and it’s pretty high in China. You’ll probably have to search quite a bit for the studies tho.

I remember the very study you reference (American wishes vs. What Congress actually passes) being a major seed of my early radicalization. If paired with the China correlation, I would have shortcutted to ML perhaps!

Just explain to them what democratic centralism is; authoritarian is meaningless, and you shouldn’t have a dialogue using their nonsense words.

If you are a mega wealthy capitalist, a cult operator or a basement dwelling crypto-bro then you will indeed find more personal freedom in the US then China. Otherwise the only big freedom™ that people in the US have over people in China that I can think of is with gun policy which of course is hotly debated on whether its a good or bad thing and you could also criticize a number of other western countries for also being strict with.

Unfortunately many of these smug idiots would NEVER take a Chinese government website’s word for it, they would just think “oh well of course it’s a lie”

Exactly, either “if US gov lies, what’s stopping socialists countries from lying even more,” or “all the countries we don’t like are constantly lying and brainwashing their civilians”

And nice meeting you 😊 🤝🏼 Comrade

Here is more evidence of it 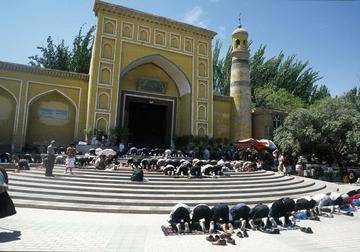 http://www.bytravel.cn/landscape/57/abahejiamazha.html Is this not enough evidence ? Please someone tell me 🥺

Western nations and their populations are biased in general. That’s just how human things go. Make sure you ask him to take into consideration his internal and regional biases before making assumptions or statements based on conjecture. Ask him to try to relate to these nations before he judges them.

I think it’s always best to ask directly if they’re willing to make a good-faith conversation that seeks truth and not victory. Be if they’re not willing to put aside bias and prejudice, they will not be willing to change their opinion.

As for you, try to look at it from their perspective. Maybe you were a lib at some point in your life, think of what helped you realize that AES countries aren’t the devil. Go bit by bit, don’t turn it into a tirade against the nation you live in. In general, people will respond better to a relatable and understandable emotional journey than to an article or just straight facts.

The law not punishing you for doing certain things is not the same as the society and economy actually allowing you to do those things.

One great example to bring up is freedom of expression. Really how free are you to express yourself in the US? The government might not prohibit you most of the time, but there are soft censorship mechanisms in place. Your social media accounts can get censored/banned/contained by the companies who control them on the regular. The press will refuse to report on your cause. The police/justice system will find ways to mess with you. The electoral system will block you through a myriad legal/semi-legal means of voter disenfranchisement.

Another great example is the idea of owning a house. Well in the US you theoretically (according to the mainstream perception) can own as many homes as you like and do with them whatever you like. Great. How does that help the ever-growing army of the homeless US citizens? How does that help the even greater number of people who can never afford their own house and are instead forced to pay exhorbitant rents to unregulated landlords? Then we pop by China, and almost 3/4 of the population owns their home.

Capitalism controls the thought, while the interests of the chinese government goes so far, speech on our internet is determined by an all powerful capitalist class. Basically, point out how while the government of America is bad, the capitalist class is also a controlling factor in our daily lives.

How many people have been killed by police in the US over the past year? How about in China? There’s your answer.