Writing on Quora ruined my life

alexanderf.substack.com
external-link
I never could have imagined I would be 45 years old and forced to become a refugee seeking political asylum in Guatemala. I never imagined that my country would use violence and the threat of false charges to steal my freedom and take my children. My crime? Disagreeing with the Ukraine narrative on Quora. On 7/22, Adam Clark-Joseph, an FBI agent, and Adrian Zenz, a CIA agent, both worked to have me placed on the Domestic Terrorist Watch List. Both are also paid “influencers” on Quora. Zenz also works at Reddit. Logan Mora, aka “Hogan Torah,” works with them. He writes on Medium about his experiences. Michael Hutton is the NSA operative who directs the US propaganda efforts on Quora, which intensified in 2019. Hutton personally threatened me with death threats on Quora. He also ordered a smear campaign against me, with 208 hate posts directed against me and his army of paid “influencers” and bots, which create the false impression of many upvotes.

It looks like the CIA is doing more to fight the information war than banning subreddits and commanding bot farms.

Excuse me, but what? 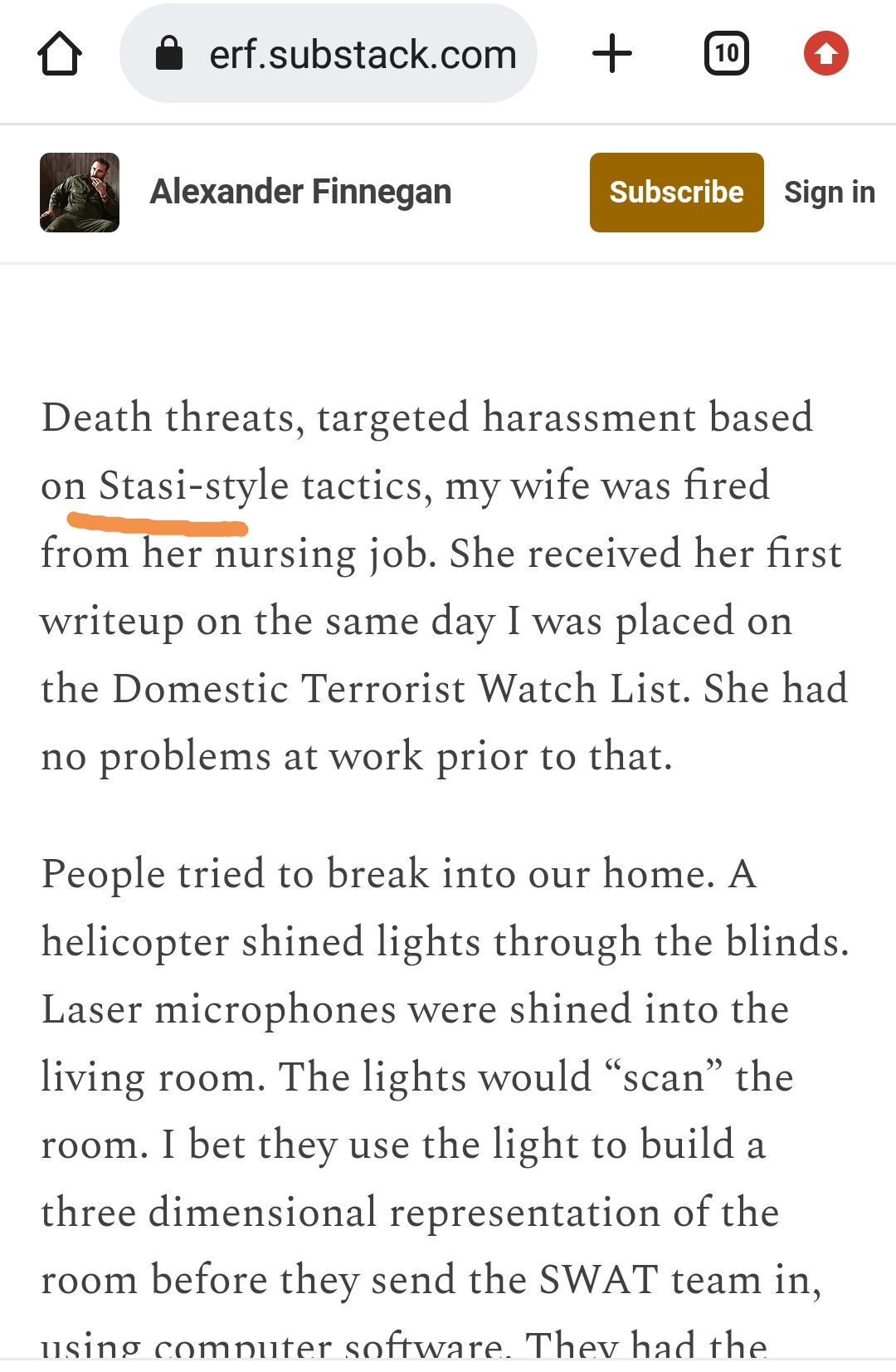 Even people destroyed by the USA parrot USA propaganda due to it sheer amount and pervasiveness, not unusual.

I guess, because some of the stuff here is somewhat head scratching 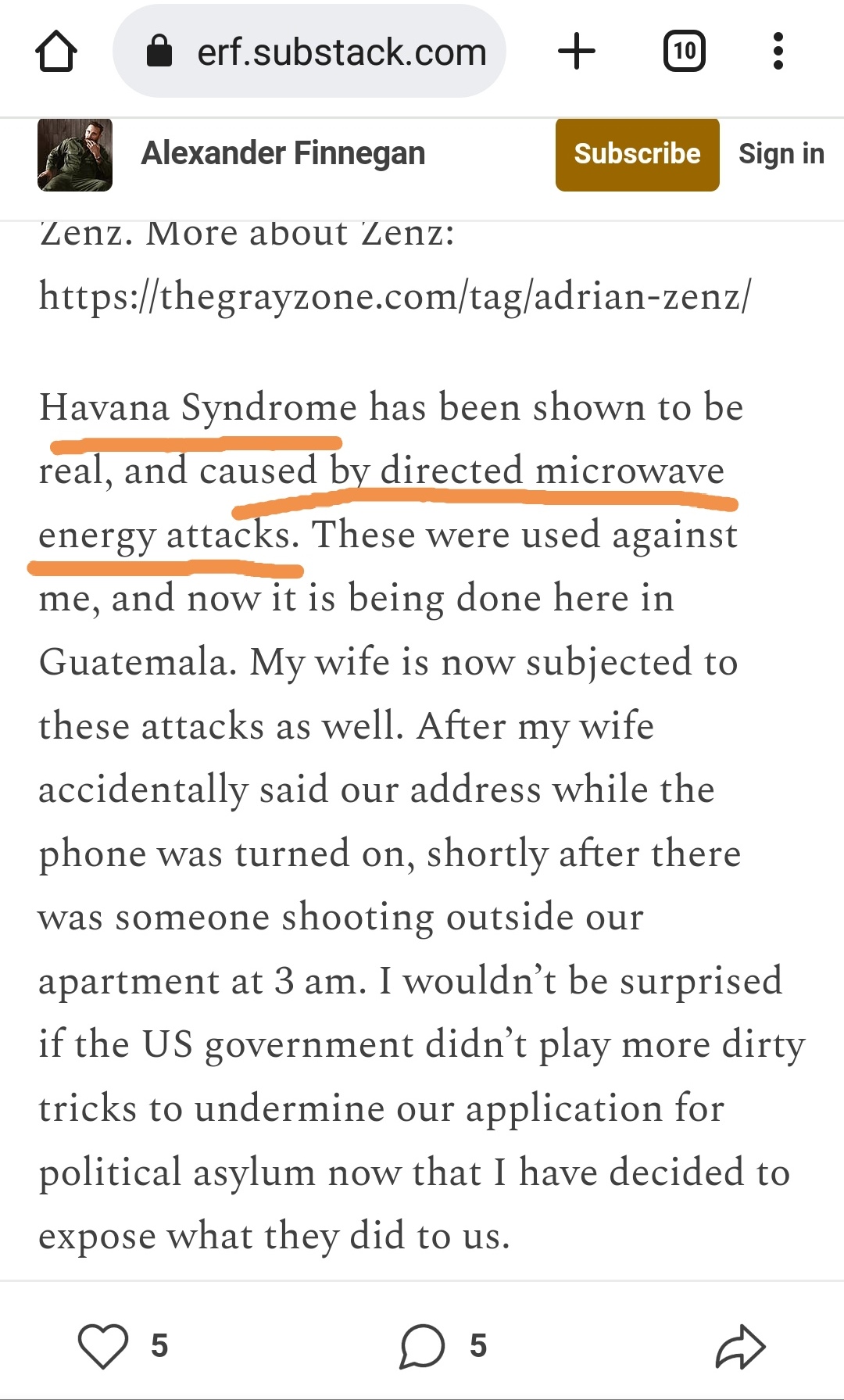 Along with what @simply_surprise@lemmygrad.ml said, these details makes me think the story itself is an op.

Then again, individuals could be targeted.

Or it could just be someone struggling with mental health, what makes you think it’s an “op”?

You’re probably right. And actually, I think you’re more likely right then I am. But, I am going to do something terribly academic:

(Tbh I don’t know the writer in the screenshots.)

I was using ‘op’ in a figurative sense, I think. Not to say this story was drafted by a secret service agent. I was more pointing out that we should be hesitant to accept the truth of the story because it’s effect will be to cause paranoia and may stop people from writing anti imperialist texts on the internet. Others have since made the point more clearly than I did.

At the same time, while it would be strange for a secret service agent to target a single writer on Quora, there are others online who would make threats that could push someone to this level of paranoia, fleeing their country.

Events like this could be seen through a wider lens that includes the hostile environment in which even the mildest leftism is subject to the harshest ridicule. That environment is curated and has the backing of the state, the media, and almost every other capitalist not already implicated in the state and the media.

So if random right wing trolls are encouraged by the general atmosphere to victimise a single writer on Quora, it is partly because a wider, officially sanctioned system facilitates it. A few publicised cases of left wing people fleeing for their lives are a successful element of a capitalist defense mechanism. In this sense, stories like the one in the OP are the outcome of an ‘op’.

I’m not suggesting that I spotted the problem at first. I’m fact, I was as sleepless as @CannotSleep420. I didn’t even want to comment until others had highlighted some of the issues. My instinct was to regret ever having written anything online about Marxism and to leave the internet immediately, forever. If this was not an op, it should have been.

Having had and read through this discussion, though, I will be more suspicious of what I may now recognise as state-backed ‘gangstalking’.

They actually do have directed microwave weapons that cause severe pain as your skin heats up. Idk about what else they can do but these things do exist. They have actually been a thing the military has been testing for many years now.

Now as far as causing this Havana Syndrome idk. It could be likely this person is taking things we know are real and making up some crazy shit.

Those weapons do exist, and there is a non-zero chance of Alexander being right. But I’m worried for his mental health, given that he might be showing symptoms of delusion. I’m not outright saying that, I’m just skeptical and need proof.

I know about those and about some other things militaries have. I do find it hard to believe that this type of gear would be used against what is essentially a single vocal activist, when similar results could be achieved with cheaper shit. You know, paying some junkie a hundred bucks to smash his head with a brick. And the usage of Havana syndrome specifically?

Basically, this could be a piece aimed to scare other potential vocal activists. You read this and you think “I should be more careful with my words”.

This is a textbook recounting of gangstalking, and none of the cases brought forward have ever had any backing behind them. Where’s his evidence? No pics in the article, just claims.

I was subjected to MKUltra style “methods” where SQL-injected, browser based code is used to insert content created by the government to terrorize the target.

Then of course to give it some credibility you pepper in some real things like MKUltra and Havana Syndrome (the syndrome is not real, but the word is and has precedent).

I wish all the best to Alexander and I’m sure he believes what he’s saying. But I don’t believe any of the claims he makes are true. There’s an underlying issue here he needs to get looked at.

Look, it’s simple. Assange was extradited and is on trial. Snowden is considered a fugitive and will be tried in the US if they can ever get him. Manning (who used to be based) was forced into solitary confinement.

Why would the state resort to harassing you when they could just throw you behind bars if they really wanted to shut you up? Over Quora posts of all things. They can even legally kill you in the US through execution. What is the end goal here? If the goal is to make you stop posting on Quora, there’s better ways to go about it.

This shit makes me wanna move to China ASAP

A lot of the stuff in the article doesn’t seem believable. I don’t believe the US would use this amount of resources to go after one person. The article does sound like he’s experiencing mental illness. However, what I could believe is the US creating the appearance of this specifically to make him seem like he is suffering from mental illness in order to discredit him or just cause him to stop answering on Quora. I would certainly not put that past them, so it’s unclear what’s actually happening.

Yep that seems clear. He might be being targeted in some way, but saying “havana syndrome is real”, is definitely an indicator that he’s experiencing some psychological issues.

Several parts of this seem a little far fetched. Why not just have the guy delivering parcels shank him or a group of police knock on the door and escort him to jail? Is this man genuinely so dangerous you need an organised SWAT raid with breaching charges and a battle plan?

I’ve had police do a no-warrant search of my flat before. Was it illegal? Who knows, but there were like 20 men with assault rifles who made themselves welcome, like what could I realistically do? If they wanted to plant something they could’ve and then arrested me. In my case they didn’t find anything and said sorry for the bother and left after four hours.

what could I realistically do?

You say, excuse me sirs (and ma’ams), but don’t you know I voted.

If this did actually happen, I don’t think their goal would be to actually organize a raid. I think it would be more to make him seem mentally ill in order to discredit him, or make him feel that way, in order to stop him from writing answers.

That’s reasonable. Is the man known besides his Quora username? Would a news article about him be of interest to anyone or be read by someone who would then go on to recognise his Quora persona?

I wouldn’t be surprised if they were using the troll farms we know they have to harass and threaten people until they stop going against the US narrative, but honestly, the propoganda is so effective, regular citizens would be more than happy to do that for them.

So basically everyone on lemmygrad, me and you included, is liable to be targeted.

See some of the other comments. I may have jumped the gun and just posted someone’s delusions.

Yes, but it won’t be lasers.

I know this guy, he always had based takes on such a terrible website, and this happens to him? USA is something else

Holy fuck, this is terrifying.

Also none of that has anything to do with MKUltra, right?

And it was well before the internet existed and it ended up as the basis for CIA torture techniques, not literal mind control.

I may have taken someone’s bait.

Maybe I’ve been had. The Havana syndrome stuff sounds like bullshit, but between burgerland rapidly losing global hegemony, the CIA’s track record of at times outlandish psyops, and the fact that I rarely touch grass I don’t really know the lengths the burger regime is willing to go to control the narrative. After hearing about that Ukranian “information terrorist” bulletin board/hit list that just so happens be hosted in Langley Virginia this person’s story didn’t trigger my bullshit alarm.